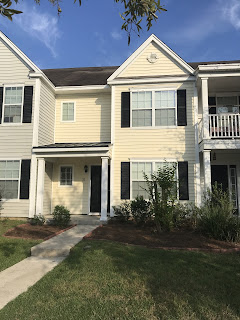 Well now that floating season is over I guess it was inevitable the free time would return to thoughts of getting the Savannah house finished so that we can get it on the market and free up the cash for other endeavors post-this tenure.

So that is how it's gone since October, when I get my 3 days off we've been scheduling the jobs that need doing like adding a cheap looking white plastic HOA-friendly fence, caulking and painting the daylights out of the place. A few houses have gone for sale in the local area and have gone into contingent pretty rapidly, a good sign. We're really just left with a couple of jobs that we can't accomplish ourselves like installing a new garage door and replacing 3 window panes that have blown seals. 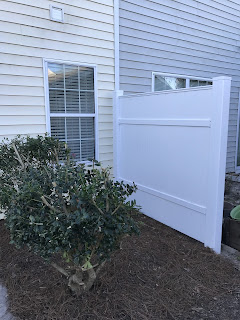 In fact the only downside is that upon sale we would inevitably return to one-bedroom apartment living for a our remaining time here just like Oklahoma all over again. But the upside would be a bank account full of the proceeds and that inner feeling that we'd feel like we're one foot out of the door all over again, can't put a price on that freedom.

There have been discussions at work about my taking a month off next july for a quick Isle of Wight dash to check on things and remind us how retirement felt again. Major issue might be the prospect of getting either myself or Mrs DD4L on the damn ferry again to get us to the airport and back here. USA house sold, money banked, motivation to return 0.

One of the key motivators for returning here though was the house we own in Cowes is a bit like a starter home. Correction. It IS a starter home. In fact it's like the starter home we bought many years ago and I don't want to sound too snobby but I just didn't see us living there for the rest of our existence. The problem was we didn't have the cash to upsize to a better place on the IOW with decent size garden, garage, driveway etc.

Yes yes yes I know it all doesn't sound very "Mustachian" of me to talk this way. What happened to minimalism? Living below your means? What gives?

Well it all works really well on paper until the point you actually retire and have to live there every.damn.day of your existence with the prospect of being there for the next 40 years or so? I think not. The question is do you want to spend the next 40 years watching your neighbor and his friends work shirtless on cars on a daily basis, spraying bumpers out in the street so that it looks like one has been murdered right there (think like spray chalk outline for a bumper?)

There's also the fact that you might be retired but your neighbors aren't and each one choose to start their vehicles at different times in a morning while they all head off to work as you're attempting to enjoy your lifetime of well-deserved sleep.

All bleating aside I just want to live in a place where I can safely say I'll live happily for the next 40 years or however long I make it on this earth.

Since all our money is invested to create income we didn't have the spare cash to upsize so selling the property here in the USA makes the most sense for a variety of reasons. The price has increased exponentially since our purchase back in 2015 but with it so have all the taxes and insurance due on the thing. Think cost of replacement, price re-assessment by the local taxing authorities and it all starts to get a bit too spendy/lofty/nose-bleedy on the overheads front to actually make it worth it anymore.

Why don't you just up the rent accordingly though?

True but the reality is I just don't see the place as worth the price it would have to be to make it pay. I just don't think the place is worth over $1500 per month.

So we put the proceeds from this place towards the proceeds from the Cowes place and you've got a nice chunk of change to go find a "forever home" on the IOW... in theory anyways. No semi-naked gorrilla neighbors, no car parking tittle tattle, and definitely no listening to 5-point turns every morning as the first part of numerous morning cummutes.

In the meantime you work the job to replace the income lost by selling the USA house and invest it into another UK apartment where the taxes are paid by the tenant and insurances are in very low triple figures rather than quad, much prefer that situation.

So there you have it, in a nutshell that's the plan.

Nice house to see us into retirement but the same income each month that we just left behind.

I'm really considering the idea of sucking it up and taking dividends from my Roth/Traditional retirement accounts when we finish here and just paying the 10% early withdrawal penalty.

Whaaaaaat? Paying tax when you don't need to? Why not wait until you're 59 1/2...it's only a decade away..why not just be patient?

When I first arrived here I think I caught the dreaded Wuhan Red death, had all the hallmarks, breathing difficulties, weakness and to be honest it gave me a bit of a fright. I mean I got the damn double vax but it still looks like it got me.

In that moment sitting there alone in a hotel room (Mrs DD4L was still in the UK back then while I "scoped the new job out") I really got my head around how short our lives actually are on this earth and how they can quite easily be cut short. In the depths of the Wuhan red death you kinda have that moment of uncertainty everyone has...

Ok let's just see how we go. Then proceed to freak yourself out for a few days.

Sitting around waiting for a pre-determined (by a respective government entity) time to take your retirement funds just makes no sense around that scenario. Live for the now because there just might be no tomorrow, that's true freedom in a nutshell, it is to me anyway.

I could rig up a 72t I know but I just want to be able to control the income flow better and not be beholden to anyone else's idea of spending the money I worked so hard to earn. So paying the 10% penalty on the dividends it is, the principal untouched as usual.

Also started reading the forums again and re-establishing my mindset into countdown to finish mode along with my brethren over at Early-Retirement.org as well as stalking the webcams over at Nissi Bay in Cyprus and planning our future fall month vacations....delayed gratification all over again..

Anyways, off to consume the vegetarian Quorn version of Turkey day. Yum! lol. 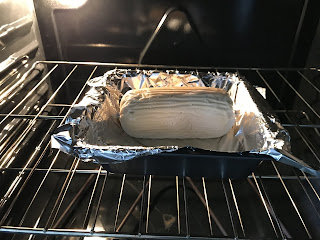 Posted by Diversifieddividends4life at 9:45 AM