The train now leaving on platform 3 will be......running over DD4L 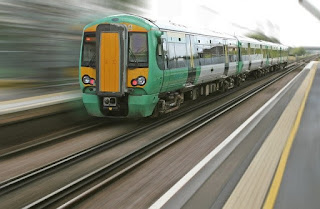 Pretty much sums up how I'm feeling as I type....

Yesterday evening I had the 5G chip implant blow dart/injection to the arm aka Covid vaccine numero uno.

All for the greater good though right? The greeeaaaatttterrrr goooood (Cue the village scene in the Hot Fuzz film)

Given we're in England we get none of the whole zero side effect spoilt USA champagne on the lawn Pfizer/Moderna/JNJ variants. Nooooo we get the free one, the Payless Shoe Store equivalence. But it's free so, y'know, suck it up buttercup.

We have the AstraZeneca veritable side-effect salad 5G chip blow dart variant so that we spend a couple of days trying to normalize an existence when you feel like you've been hit by a train/morning after spending the evening consuming numerous inexpensive and vastly different alcoholic beverages.

Then I go back and repeat process in July for the second one. If at first they don't succeed....they get a second chance to see you off. Joking..joking....joking.

Not complaining at all...honestly. I understand what's going on in India and how lucky and privileged I am to even have a vaccine when numerous folks the world over are not so fortunate.

To be fair I didn't have much time for the MSM tinfoil hat fear angles, while I was at the vaccination clinic and they're getting into the bones of the whole blood clotting explanation my inner impatient Dividend Nomad was chomping at the bit "yeah yeah yeah, let's get this done so we can get out traveling again"

In fact I can just as easily picture my epitaph reading the same statement "but he just wanted to travel again..."

Anyways, back to business.

The last of the soil mountain is currently stacked up in the corner of the yard but I'm going to the dump today even in my present heavily weakened state (I booked it, I'm going!)

Friday we have delivery booked for a tonne of aggregate so that I can get on with the patio and path.

For the past week we have been bleaching and painting the fence in a Masala Curry light orangy brown which I'm confidently informed will "calm down" in the fullness of time. 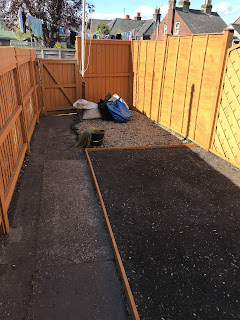 Then next week we should be good for laying turf and our little garden oasis is pretty much complete and ready for an enjoyable summer.

Also replaced rotten wood and re-painted the shed brown and moved it along half a meter to the left to facilitate relocating the dryer to it's own little room which just needs power running to it now:- 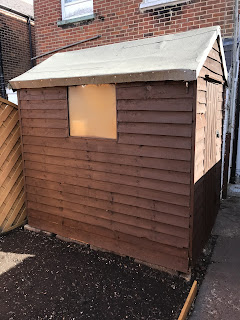 Recent work has not been without it's grisly injury though..

For the longest time maybe we've been tempting fate such that a resetting of the old "0 days without an accident" sign was somewhat an inevitable really. I'm way too periodically clumsy for it to be any other way.

Really made up for lost time though, darn nearly sliced my thumb off via the following butchering device (Jigsaw from the Saw films would have been proud) :- 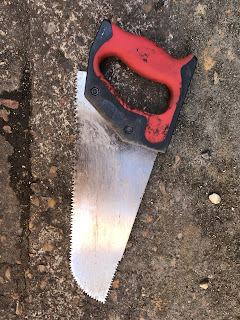 It was one of those moments where since you haven't been injured for years the shock really hits you pretty quickly. Cold sweat, sitting out the hard pain, sleepy feeling....repeat until gauze and tape can be found and attempts made to stop the bleeding. I think it hurt more because it went right through the thumbnail then carried on cutting. Fkkkk!! AAAAARRRRGGHHH!!

How did it happen? Well..I was cutting away a rotten fence post that had been screwed to the fencing panel from the inside of the latter so the screws were inaccessible. (if that makes any sense) Had no choice but to hack the post down in sections using my friend the now infamous "bastard" saw and unscrewing it by rotating each sawed section manually to free it. It was only on the very last lowest section that bastard saw worked his way through my thumb.

Sooo close, nearly got away with it.

Anyways new post is now concreted in (mid pic) and we're good to finish off the fence all the way to the wall. Then we won't have to see the neighbors gas bottles and assorted clutter as we enter the garden..

Hopefully by next post we can show pics of the completed back garden!!

Didn't make any trades this week, most of the portfolio has seen an insane run-up, particularly Northrop (NOC) which is constantly proving itself King of the Quality Dividend stocks with monster earnings. But on the subject of "other dividends" we now have allocated parking and electric gates added to the Southport rental property. Very swish. Hope the tenants welcome the new additions. 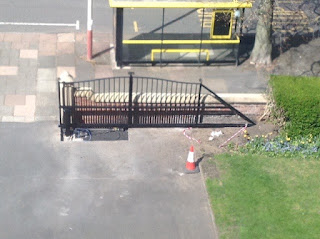 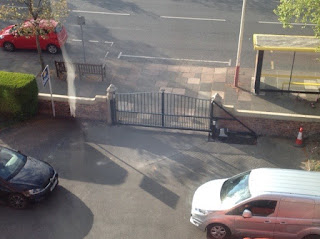 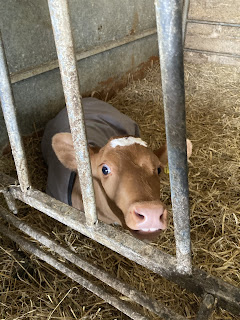 We also did the Isle of Wight rounds to check out the new "babies" be they pigs, birds and in this case Guernsey calves. The pic above is of a calf at Briddlesford Farm we affectionately nicknamed Buckie due to his extremely cute natural underbite. Big awwww. Awwww. Seemed particularly partial to ear rubs.
Will definitely head back to see him again soon.
Love to all,
DD4L

Posted by Diversifieddividends4life at 1:30 PM No comments: