Everyone has a plan...'til they find a dirty big hole in their wall.. 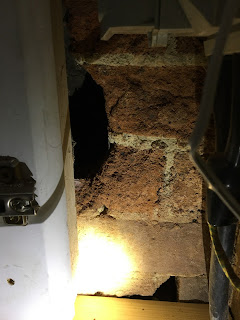 Can imagine if Mike Tyson got into house remodeling there's a reasonable chance he might say that...well, y'know...one can only guess..

I think in my last house-related post I might have understated the whole "fix some small remaining damp issues" or words to that effect..

As myself and Mrs DD4L sat watching TV one evening she couldn't help noticing a little draught coming from around the door to the electric meter cupboard next to the sofa. I agreed we needed a little insulation around the thing, maybe some crawl space air was coming up through the floorboard gaps inside? Perhaps.

I put some insulation around the tiny gap around the door and thought nothing of it, until the next cold evening...

Yeesh it still feels cold in here even with the heating on.

Finally figured I'd get in there and put some insulation on the floor in the cupboard, kill the problem once and for all..

Got my head in there though...right in, other side of the hinge and I can see the inside of the damn front wall. WTH??

Basically I had access to the inside of the wall cavity. I could put my hand in it. Yikes!

So pretty much all the cold air inside the cavity was flowing right into the meter cupboard and into our front room. No wonder it was so damned cold.

Block of wood and a packing of caulk and it was blocked off...done. Yeah I know a bit of a bodge fix, needs bricks and mortar but it can wait for now..

Also had a strong damp smell coming from the front hallway to which Mrs DD4L responded "aah jeez you're not gonna rip the entire damn wall apart again are you?" 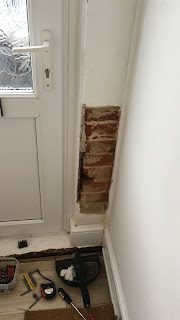 So after chiseling and smashing the plaster and wall I arrived at the source of the damp mildew smell:-

Check out this little sucker.. Basically this piece of wood had been bedded in the wall for years, if not decades most likely as part of the original Victorian house front door and then plastered over, soaking in water over the years until it got all moldy and smelly. Why had it never been just dealt with? Your guess is good as mine.

But gone it is. Good bye random piece of moldy wood your days are no more.

Then proceeded to drill holes and add damp course rods in the brickwork in a few other locations around the house and we were good to add new baseboards and plaster. 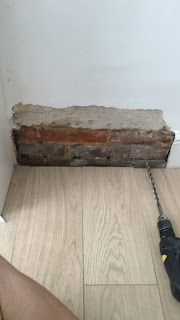 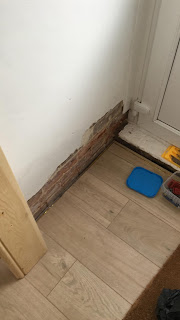 Oh and per the previous post DD4L Jr moved into our place with his girlfriend. You might remember I mentioned the boomerang deal in January. Well it happened on time and they are now living in our second bedroom.

We're about 2 weeks into this new situation and it seems to be rumbling along pretty well, his girlfriend got a night shift Carers job almost immediately so we barely ever see her. Junior hasn't had as much joy as yet though, Engineering has been hit pretty hard here as you can well imagine with a lot of projects on hold. No worries though I'm sure it will all work out when it's meant to.

Got some stock news too, which seems to be quite rare nowadays due to lofty valuations.

Sold out Gladstone Land (LANDP) Preferred and bought in...wait for it....

Yeah I know not exactly what you'd call a stretch but just wanted the longer redemption date. Prices were about the same for sell versus buy and yields are pretty much the same too.

Also sold out Private prisons (GEO). It's been a long time coming and I know I should have really bailed on it sooner, I just think the new US leadership is going to spend the next few years trying it's best to decimate the private prison industry while GEO continues to gradually decimate it's dividend. I'm over the rollercoaster ride, time to move on.

So where did the proceeds get redeployed?

Well for all you investing with a conscience/non sin stock folks sorry to disappoint but I plumped up the cushions on the Altria (MO) position some more. Theory being now that Mr Trump is out of the way along with his smoking vendetta and unjustified JUUL hatred (rest of the world thinks vaping is healthier as it helps smokers wean themselves off regular ciggies.....DJT disagreed) we now have a chance to see better days.

Apart from that longer term I like to believe we'll see more widespread legalization of cannabis US-wide under the new leadership which may finally see little MO enter that market with avengeance.

Posted by Diversifieddividends4life at 12:50 PM