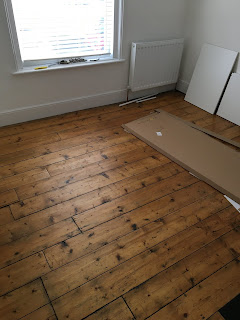 Happy times!! The flooring is in and others sanded/varnished and we're finally starting to slack off a lot more now, turning up at the house as and when we choose, loping around the place with less of that pressure-pressure-pressure mentality for the move-in date. It's a heck of a relief.

Even found the time on top of the French to take on another two Duolingo languages, Spanish and German. Not jumped back on the Gouache painting yet but it really shouldn't be much longer.

Anyways back to house.

This one has definitely been more stressful than all the others so far because of the unknowns, and the fact that we'd never pulled up boards and replaced floor joists before. Those things were just way too rotten after a century of neglect so we managed to replace all the ugliness or sister the semi-ok ones. 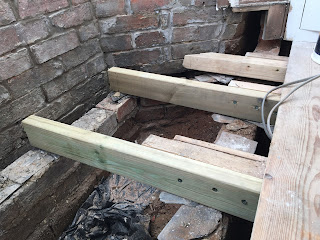 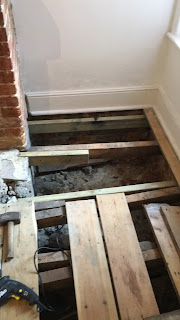 Pics: Sistering/replacing of the joists in the front and dining rooms, below is the central heating installation. 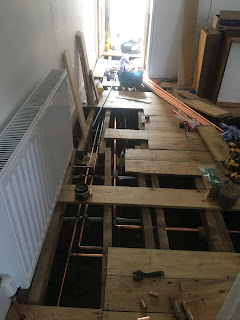 In the sanded and varnished state we also love the upstairs floors, that's it shown in the pic at the start of the post. Bear in mind these are 130 year old floors and have seen a lot of history so it's cool they get to see the light of day again.

So now it's just a bunch of putting up chests of drawers and wardrobes for clothing and adding linolieum floors to kitchen and bathroom and we're ready to move in on the 15th of December. We even gave notice on the apartment in East Cowes so we'll be then down to only one set of utilities and taxes!! Yay!! Much more FIRE budget friendly.

While working on the place both of our minds have definitely been wandering back to travel and the hankering therein. It's strange to be FIRE free and yet still be stuck in a cold weather climate, we've usually high-tailed it to a warmer snowbird climate by now to extend summer but due to Covid obviously regular life is on hold. Oh well.

At least the Isle of Wight is currently Tier 1 on the government system so life is as normal as it can be after lockdown finishes on the 2nd of December.

In the spirit of the last few blog posts here is a Dividend Nomad post about Measurement:-

For as long as we can remember the societies in which we have lived have been run by measurement in some way shape or form. We can never seem to help ourselves, from birth through education and in our chosen workplaces we are constantly reminded that we need to be the best at whatever task, exam, project we undertake, we are even measured in the success of our personal relationships. We are measured against our classmates, peers, siblings and eventually work colleagues and our relative success or failure is judged accordingly.

This measurement process has been the case for generations even though it is universally well known that not all people are born with the same level of intelligence, natural skills, personalities or abilities. But in all fairness who decided all this measurement was necessary? If we know full well that all human beings are not created equally then why is it still necessary to pitch everyone against each other so that society is divided into so-called winners and losers, successes and failures even though the odds are obviously already decided by nature.
Towards the end of my Engineering career I witnessed this measurement taken to it's extreme, I was always led to believe that a little measurement did no harm if it created a little healthy, harmless competition between people but in reality it has now gotten completely out of hand. In fact it has gone to such an extreme that we are now starting to see catastrophic consequences of this lunacy, for that is what it truly is. Needless lunacy.
While busy working 60+ hour weeks in the USA I lost two cousins based on what I see as the needless repercussions of measurement and it's unnecessary pressures that it places on society. The first cousin was unemployed for well over a decade before landing his first job after many years of trying with no qualifications in a high unemployment market, after a time he was unfortunately redeployed in his role to one of the most dangerous locations in the UK and started to receive death threats daily in his public-facing role. As a result he turned to alcoholism and proceeded to lose his job and eventually drank himself to death. I am convinced that the pressure of keeping the job he had struggled so hard to get and living by the success and failure rules imposed by our society led him on this depressed path.
The second cousin suffered a brain injury at the age of 10 and as a result was never to successfully hold down a sustained career or relationship, he took his life in a local hotel on valentines day in 2017. Again society dictates that everyone should marry, have kids and hold down a career and he acknowledged that he could never achieve any of these so saw no reason to continue.
The needless end to both of these young men's lives highlights very well the point of how the societies of the world have become almost obsessed with applying pressure for people to conform to it's measurement. Our schools, colleges and careers are now more measurement-obsessed than ever and we are rapidly catching up to Japan where the Karoshi culture of burnout and death by overworking has been prevalent and costing lives unnecessarily for many years now. The only positive silver lining of this situation has been the FIRE movement that it has created, placing control firmly back in the hands of the measured. It's easy to see how it's growth is now critical moving forward if society is ever to return to some sort of sanity.
The sad part is that it's only towards the end of my Engineering career in the height of burnout that I began really to take an introspective look at how my own life has been directed by measurement towards one pressurized and unnecessary goal after another. Be it the pursuit of ever-increasing education, wealth, or forging up the career ladder to be judged by my peers and relations as a success and create some subsequent perceived internal happiness. It's only now that I see measurement for the negative force that it truly can become when left unchecked in this society, I have since spent a lot of time uncoiling it's grip on my life and the life of everyone who is willing to listen. Any acceptance of measurement or goals and ambitions in anyone's life should be from within and personal, not because society dictates it so. It's time to break this cycle that we have seemingly freely and willingly trapped ourselves in for centuries and live our own lives on our own terms doing what truly makes us happy, whatever that is. If we choose to do nothing, never get married, never go to college then that is our choice and freewill and no member of society or family has the right to judge us accordingly.
Even though I know that I can't bring back my two cousins, if I can highlight the detrimental results of societies' obsession with measurement and help people to see it for the nonsense that it truly is, then maybe more people can start to also uncoil themselves from it's grip before it has a chance to also damage their lives and mental well being irreparably.
Thanks for reading,
DN

As of the time period ending June this year (when I re-FIRE'd) I can honestly say this is all still very much relevant, the employer where I worked for those 8 months had for years been a hold-out for the burnout measurement mentality but even it had transformed too. The pressure was pretty much there immediately, tracking progress twice a day. Almost like my two years of FIRE never happened and I can now say I realized I'd made a mistake by the first week. Now after 6 months back in FIRE it's easy to see this is where I belong, no doubt about it all. My curiosity and burning question whether I retired too soon/should be retired has been categorically answered with no room left for any doubt.

And time to enjoy a paid off house of our own that isn't a rental for someone else's benefit.

Posted by Diversifieddividends4life at 9:53 AM